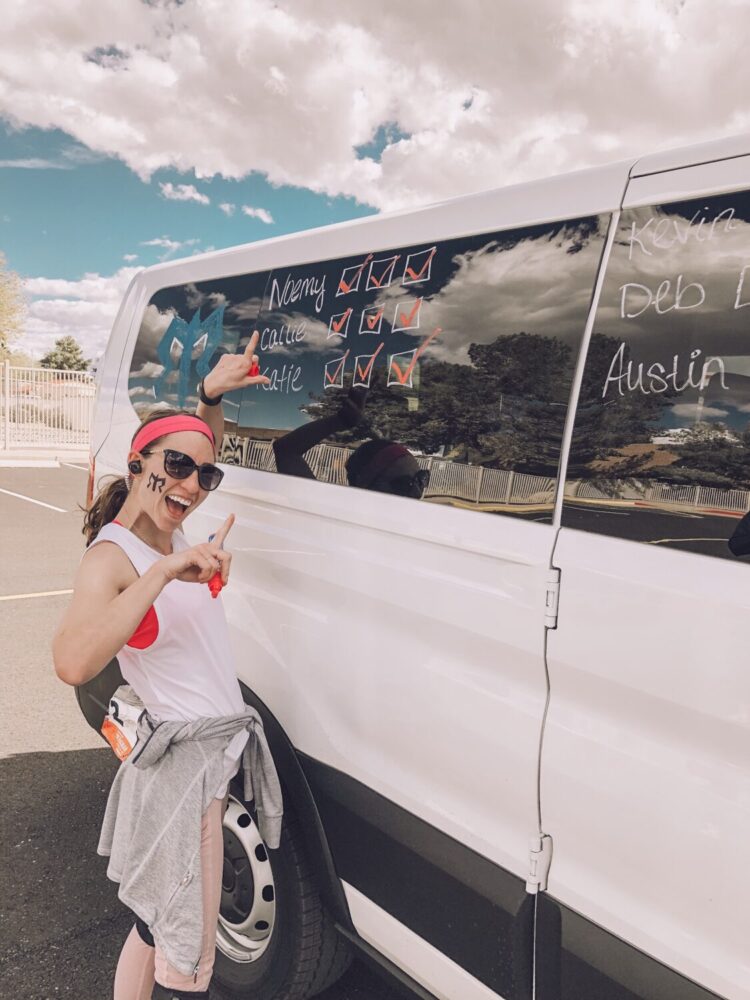 This is probably the absolute craziest thing I have ever done.

Ragnar has been a fitness goal of mine since I heard about it several years ago. Basically, you have a team of 12 people that rotates running a total of about 200 miles. My struggle was I couldn’t find 11 friends crazy enough to start up a team and register with me.

Finally, I took getting on a team into my own hands. I am part of a local running group and posted that I was looking to join a team. I was kind of late in the game but I just felt like if I didn’t reach out – I would never do this race.

I had two teams email me right away with their group info and price breakdown. You have to pay the race registration fee and then as a group you split up van rentals, required gear (head lamps, reflective vests), food/snacks, and any other team pride logo wear. All in all, my cost came to $175.

Okay, so now I am signed up with 11 people I have never met and will be spending an approximate 24 hours in van with 5 people I DO NOT KNOW! Cameron always says that I could make friends with a wall so I wasn’t too concerned.

My concern did come because Riggs was still breast feeding and would no way take a bottle. Once I secured which leg of the race I would be running, Cameron and I spent quite a lot of time planning out where we would meet up so that Riggs could nurse. We had to take into account driving, when I would be running, and of course when Riggs slept + normally ate.

It was a lot hectic but Cameron was such a sport and told me he would meet up anywhere so that I could complete this goal!

I met up with Van 2 on Friday afternoon after teaching ballet class! ha
They were all super nice and made me feel included right away. Cam and the boys hung out with me for a while and grabbed food, I fed Riggs and then it was time to go. My first leg was 4.5 miles and I seriously felt awesome. I was like “I’ve totally got this”

When our entire van was finished with our first leg it was getting pretty late. We decided to all go get food and try to sleep. We were really close to my house and Cameron met up with me to feed Riggs. There were showers and food so while everyone ate, I actually went home and showered which was glorious. I grabbed a little to eat, finished feeding Riggs and then walked to a meeting spot to wait for my group. We drove to our next race spot and tried to sleep.

That was a complete joke. The event had a high school set up that you could pay $2 to go sleep inside but it was crazy noisy and people were getting up to get ready for their race leg every 10 minutes. We finally all caved and went to sleep in the van.

My next leg was around 2am I think – I honestly don’t remember anything except being really cold and really tired. I attribute that to my knees starting to hurt bad. I only have 2.5 miles to run but it seemed like 12. Honestly, I cried during that run and hated every step.

Cameron met up with me when Riggs woke up around 7 or 8am. I was a mess, so sleep deprived and sore. My boobs hurt from going too long from nursing and my knees were on fire. My next leg was 7.5 miles and I am pretty sure I told Cameron several times that I just wanted to quit and go home. Riggs was super interested in everything around him and didn’t want to nurse which was awful because I need him to.

We finally went on a short drive, grabbed a bagel and got him to calm down enough to nurse. Cameron also brought me a knee brace which worked wonders. With some food in my stomach and relief in my chest, I felt like I could push through. This was a goal I had been working towards forever and knew I would kick myself if I didn’t follow through. I was in great shape physically and just had to work through the mental battle.

In the early afternoon my longest leg arrived. I decided I wasn’t going to stop or walk for anything – well except traffic lights.

My team was willing to trade legs with me for a shorter one but I felt like that would be cheating my experience and I promised I would be fine.

I ended up having one of the most memorable and relaxing runs of my life. I listened to podcast and felt super in the zone and I didn’t feel hardly any pain in my knees at all. I finished with a 9:30 pace which I was really pleased with – all things considering.

Cameron and the boys and my team were there waiting for me and it felt awesome being cheered on. We had three more teammates to go before our entire race was over. The crew piled into our now, very ripe smelling van and headed for the finish line.

It was an awesome experience that I would do again in a heartbeat – well maybe without the breastfeeding business. But I did learn that my body and mind are capable of amazing things. Being a mom is just one part of who I am and I knew that during that weekend I could be a a mom and a runner!