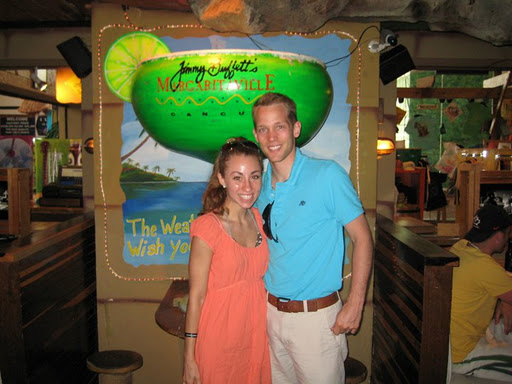 Cameron and I stayed in Aiken our first night as a married couple.  Basically you can get away with anything saying that you just got married.  I am sure that the tux and huge puffy dress helped convince people but seriously so funny.  We went to the wrong hotel where we tried to get to the back of the car and get our overnight bags.  2 pounds of rice later we find my cell phone and realize Cameron’s was left with the groomsmen.  My Dad’s phone dies and so does the old Camaro.  Now we are stranded at the wrong hotel.  Finally my Dad calls back and we figure out how to start the car.  Now picture this amazing car filled with balloons, newspaper, rice, condoms, strawberries, whipped cream and an assortment of random things mainly a big white dress.  We make it to the right hotel down the street and they ask for our driver’s license and a security payment for the room for the night.  um…. opps no wallet, no money, no driver’s license, no phone, nothing!  They were super cool about it and gave us the room anyway since it was already prepaid.  We were starving and I tried to convince Cam to walk over with me to the Applebee’s for a late night snack! That was a no go haha.
The next morning we went back over to my home for brunch and to open gifts and say bye to family.  It was relaxing and fun to see what our sweet friends had given us.  We dropped off some wedding flowers to our neighbors too! We packed and were off to Augusta for the next night and our flight Monday morning to Mexico!

We were in Cancun until Saturday morning and had the time of our lives.  It literally only rained for 4 minutes on the beach and our hotel was gorgeous.  We had unlimited food and fun.  We attempted scuba diving but Katie in tight spaces = tossing your cookies over the boat while getting hit on by a slightly gay Mexican in a Speedo. It was fun though and I think one day I would like to try again.  We laid by the beach, ate a breakfast that cost $100 but we didn’t pay a cent.  We went into town to the market.  We went to a gorgeous 5 star restaurant.  We made friends with a jewelry billionaire that gave us gorgeous earrings.  Basically it was the time of our lives and it was wonderful to make these unforgettable memories with my best friend.Monday morning came and we took a shuttle to the tiny airport.  Starbucks helped solve the rude airline people’s no free bag policy for international travel but $5 for cereal was not as fun.  Then we flew from Augusta to Charlotte and then we were suppose to have a quick flight to Texas.  Well that quick flight ended up being 8 hours on a tar-mat because of bad weather.  They would’t taxi us into a gate to get food and they wouldn’t give us food for at least 2 hours of waiting.  Well we had already been flying for a couple of hours and were starving.  Yeah about that wedding cake topper you are suppose to save for your 1 year anniversary.  We ate that in the first 30 minutes.  Then we were handed one granola bar and a pack of goldfish and waited some more.  Finally arriving in Texas we ran literally sprinted through the gates for our departure gate which we had rescheduled for a few hours later while on the plane and were still close to missing.  It all worked out though because we got bumped to first class for all of our trouble and had a 3 course meal with a movie and recliner seats all the way to Cancun!