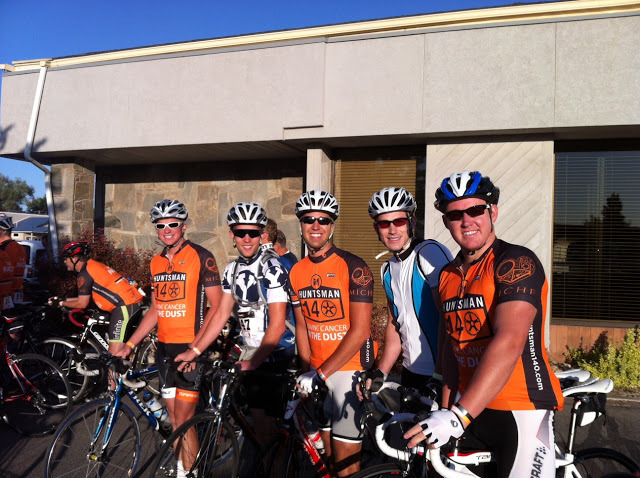 It was traumatic, long, and sweaty!

Cameron had been training for the Huntsman 140 mile bike race from Delta to Salt Lake for months and his three man team raised close to $2,000 for cancer research! Amazing right?!
Well they started on their 100 mile stretch to lunch at 7am.  Cam was out of water in no time after filling up at 2 aid stations along the way and those hills were killing his cramping tired legs.  For the first 25 slightly uphill miles they were averaging 22-24 mph, then the next 40 miles were climbing hills killing all adrenaline that the pre-race exctiment had given.  Luckily what goes up must come down and the next 7 miles down hill, the guys flew down at 45 mph.
Are you keeping track and adding that up?
The guys only had 28 miles left till lunch.
His gorgeous and on time (for once in her life) wife was patiently waiting at the lunch stop at Saratoga Springs to cheer on the Feloton Team and show the boys, and especially her cute husband, some support!
I sent him a cute text letting Cam know I was there and to look for me cheering!
Well thirty minutes into waiting, I went looking around wondering if I had missed him among the other sweaty  men eating.
Nope.
One hour passes and I try to give him a call.
No answer.
Now, I am sure you remember that over active imagination I was bless with, right?
Well, start your engines.
I call again.
Nothing.
1 hour and 35 minutes later, Cam’s teammate Dave comes riding in.  He looked exhausted and just plain beat.
K:  “Hey Dave! WhooHoo! You did it! Where’s Cam?!!”
D:  “……………………………… *sigh*”
K:  “WHERE IS MY HUSBAND?”
Dave explained that Cam had to stop a ways back and their other teammate had dropped out!
I was so confused.  My husband is a stud, he can cycle circles around these other guys.  What has happened?
Well I had other commitments and I was already pushing being late.  So, I sent a quick picture to Dave’s wife, made her promise to get pictures of Cam at the finish and then drove off.
5 Minutes after I leave, Cam calls and said he just saw me and thanks for coming to support him.
Bummer 🙁
He said he didn’t stop because he knew he couldn’t start again, but that he had to slow down and think of lift right leg, push down left leg, lift left leg, push down right leg, the last 28 miles in for lunch.
The guys ate and were driven 20 miles to get caught up with the front so they could all ride in together at 4pm with Echo.
Echo is a little girl that had cancer and lost her leg.  She leads the pack the last mile of the race on her tricycle  to the cancer institute.

Cameron said that it was the hardest thing he had ever done in his life.  To ride 120miles, sit on a bike seat for 8 hours, to run out of water, to be so hungry he wanted to eat anything and everything, the pain and cramps in his legs climbing hills, the mental battle, and the heat of the day.

He isn’t really interested in doing anything like that again but he still loves to cycle and train.  I am very proud of him for accomplishing something so challenging.  Cam knows for sure that, He Can Do Hard Things. And I know he is a stud!