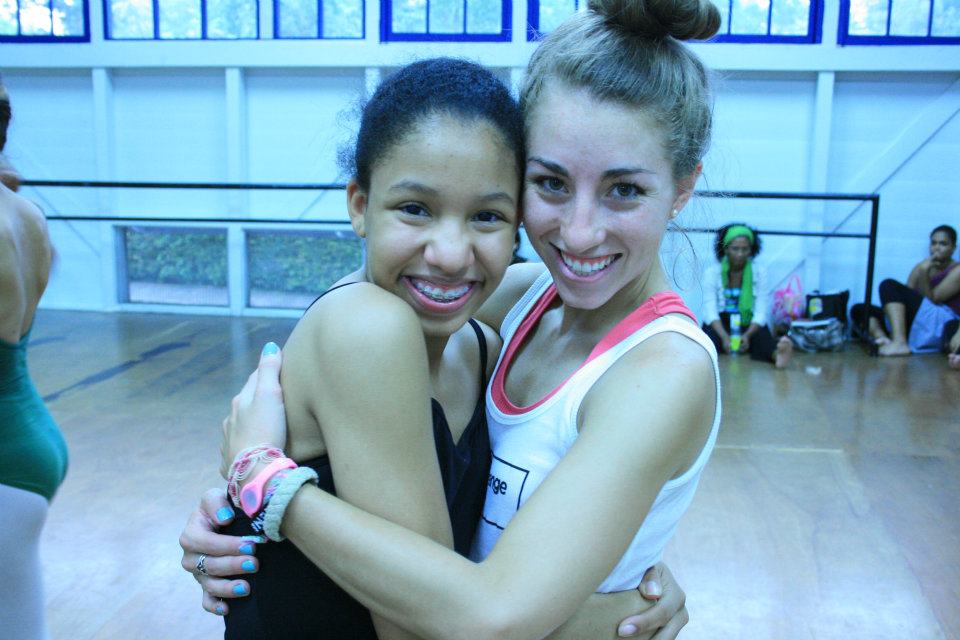 This morning everyone wanted to just stay in bed and cuddle.  We were all so tired from the fiesta we had last night at Tantalo.  Our first class in this morning was cancelled so we decided to all just hang out until lunch at 11:30.
We went to take a group picture in our new Movement Exchange logo tanks and then went back to ‘Super Gourmet’ around the corner for lunch and it was great just like last time.  I had a turkey sandwich on a baguette, V8 Splash, and one delicious chocolate chip cookie!  It was crazy hot today and it felt so nice to be in the cool air conditioning of the café.  The owner is an American named Blaine and we love him, mainly because he speaks English and might be easy on the eyes so we tried to set him up with Mama T. to only find out that he is happily married.  haha

After lunch we went back to the hostel and while we were gone, they had gotten robbed.  A homeless man and seen the door left unlocked and open and came in and took the owners purse sitting on the desk and ran off.  We felt so bad but luckily nothing else was bothered.  Then the Malambo groups headed off in their bus. I got my things together for my class and left by myself (since I teach alone) to walk to San Felipe.  Okay, now picture one cute and very white chica walking two blocks to the foundation.  Seems fine right.  Middle of the day, I know where I am going and feel very confident until the retarded construction workers make me detour and I got lost.  In Panamá. Alone.
This was my first “apple” or good thing of the day.  I stopped and asked in Spanish how to find the foundation and got directions and UNDERSTOOD them! AHHH
When I got to San Felipe the girls were there waiting and we walked part of the way with Jaimee’s mom and then split off for Hogar.  To be honest I am not scared of walking around Panamá, I actually find it quite relaxing to walk the streets of the city and immerse myself among the people.
When we got to Hogar one of my boys was not coming to practice because he was in church, well crap I was freaking out because our performance is in three days but it was our last day of practice with the boys but at the same time I couldn’t be mad that he was in church, you know!?  Anyways, I took my partner and put him with Crystal and then made the two groups do the dance with me in front by myself.  It was great to see that they didn’t need me to help them, so then I didn’t dance it but I counted it and clapped the beat.  The most amazing video ever of me yelling out commands and number in Spanish like a chica loco!  The last time that we practiced without an audience I didn’t count, dance, or give hints,  I wanted to cry I was so happy that my kids were rockin that Cha Cha Cha like pros.
Take a non-Spanish speaking white girl, throw her in Panamá, give her three days, and five kids and you have got yourself some dancing! 🙂
After class we quickly took off for the Escuela Nacional de Danza for Mama T. (Typhani) to teach the ballerinas a jazz class.  She did amazing as always but it was a little harder with a younger group of students that are not use to other dance forms.  Mama T. is getting really great at Spanish but today she did especially well but it was hilarious that she tried to talk about taking a step (paso), rolling to the floor (piso) and using your weight (peso).  Crazy right!?
When we came in the studio I saw Kiki again and told her that I had wrote about her on the blog and she was ecstatic and started crying and hugging me and told me how much she loved me.  Yeah I know. Now YOU know why I want to live here. We had a break for snacks that consisted of fruit and vegetables, sandwich goods, cookies, sugar cane, Plantanitos, and lychee.  We had an hour and a half before rehearsal with Diguar and just sat/laid around and talked. I also popped everyone’s back-you know Glitter style!

We were all pretty beat from the emotions of the day and Diguar seemed to notice.  SO, he asked Mireya to do a Brazilian Afro-Cuban warm up with us! FREAK YES!
We got started on Diguar’s piece and he started talking right to me and asking me questions… ‘si?’
uh… I have no idea what you are saying Diguar, so yes ‘si’ haha!  He talked a lot with the group about what it meant to have a finished product and who gets to decide what is ready for the stage or not.  He is very into the process of the movement and how we are feeling in the dance and not the dance or technique itself.  This is a new experience for me because he changes his mind every other minute and changed the direction we face… uh okay cool! We drove home and took showers and then had our reflection period which went amazing.  Everyone is feeling so positive and optimistic about their kids!
My favorite excerpt from Mama T./Savannah/and Rianna’s blog, enjoy:
On the way there one of our friends Katie (aka Glitter, unicorn, sparkles, anything sweet and corny) found a kitten and decided to chase it all over the place just to pick it up and take a picture with it.
This is true, this is true.